As well as taking the Edinburgh International Book Festival around the country throughout the year, Booked! brings major book events to Edinburgh beyond August too – and this autumn we’re hosting events with two world-renowned writers. On Sunday 17 September, we welcome the Nobel Prize-winning Turkish author, Orhan Pamuk, to discuss his latest novel, The Red-Haired Woman, while Man Booker winner Alan Hollinghurst introduces his long-awaited sixth novel The Sparsholt Affair on Tuesday 10 October.

Orhan Pamuk, who won the Nobel Prize for Literature in 2006, is one of the world’s greatest writers, bringing Turkey to the forefront of our literary imaginations and will be making a rare appearance and his first at the Book Festival since 2001. From the IMPAC-winning My Name is Red to his recent Man Booker International Prize-shortlisted A Strangeness in My Mind, his work investigates the complex relationship between East and West. His latest novel is set in his beloved Istanbul where a master well digger and his young apprentice form a simple life sharing their days, meals, and stories. Until the arrival of a travelling theatre company, and a beautiful woman, opens up new dreams and possibilities that will ultimately lead to devastating consequences.

Alan Hollinghurst is one of Britain’s finest writers – a novelist, poet and short story writer, he has won the Somerset Maugham Award, the James Tait Black Memorial prize and the 2004 Man Booker Prize. The Sparsholt Affair is his long-awaited sixth novel. Beginning in 1940, two young men begin studying at Oxford University knowing that a call-up to the war is only 12 months away. A prospect that inspires new freedoms and recklessness, and leads to actions that will impact for years to come. Hollinghurst takes us on a remarkable journey through post-war society all the way to the present day exploring Britain’s social, sexual and cultural changes, asking questions of where and who we are today.

Orhan Pamuk will speak at the Edinburgh International Conference Centre on Sunday 17 September at 3.00pm and Alan Hollinghurst will speak at The Pleasance Theatre on Tuesday 10 October at 7.00pm. Tickets for both events cost £15.00 (£12.00 concession) and are available on our website at www.edbookfest.co.uk or by calling the Box Office on 0845 373 5888.

As ever we’re grateful to the players of People’s Postcode Lottery, whose support allows Booked! to deliver Book Festival events throughout the year and around the country. 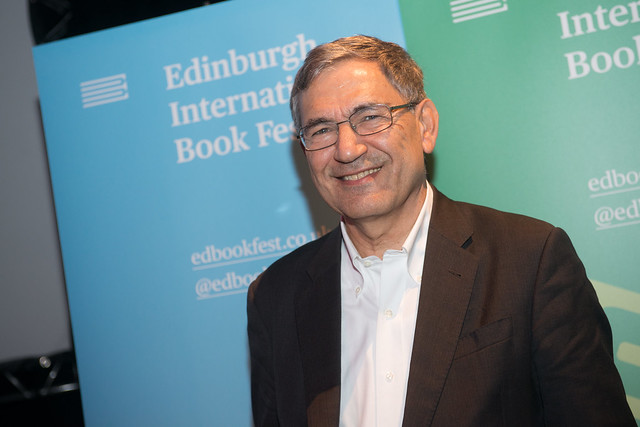