The Citizen Schools programme was wide-reaching in its first year: I was invited to engage with three very different groups of young people from three different schools in Edinburgh. The class at Broughton High School were S2s, and I attended their double English period each week, becoming known as ‘the poetry lady’ for a while! The class at Craigroyston Community High School were an ESOL group (English for speakers of other languages), ranging in age from S4 to S6. This group contained speakers of eleven different languages from thirteen countries around the globe, including Senegal, China, Bulgaria, and Brazil. The third group were the only self-selecting group in the project: students from Liberton High School could choose to leave their classes to attend 'Friday Club', as they dubbed my sessions, and we met in the school’s high-tech Learning Lounge in the last double period of every Friday.

All of the groups undertook the same work on Citizen, but their responses to the stimuli I brought to classes were vastly different.  I began by asking all the pupils to make a zine (find out more about zines in the blogpost I wrote earlier in the year) about an issue that mattered to them as a citizen of the modern world. I felt that this hands-on activity would provide a quick way for me to get caught up on who the pupils were and what they felt passionate about; the content of their zines would also raise themes that could be explored as Citizen developed. As zines are also primarily visual, I knew this would be a non-threatening activity that could bridge potential barriers relating to literacy or language within the groups.

Zines were created on a series of wide-ranging topics, from feminism to football; cyberbullying to body positivity. Pupils at Liberton proved themselves to be extremely politically savvy, creating zines on things like trans rights, mental health awareness and eating disorders. At Broughton, the zines were about issues closer to home: several of the boys in the group created brilliant zines about the importance of football in their lives, but also about the pitfalls of football rivalry and tribalism. At Craigroyston, many of the pupils made zines about the places they were originally from, and in some cases, the things they missed about those places: family, food, language and music were among the topics.

A word that was used a lot in the early stages of the project was belonging: each group offered different definitions for the word ‘citizen,’ but the word belonging was embedded in every definition, and seemed to sit very closely alongside ideas about citizenship for the young people.  I was keen to tease this out, and a lot of the work the groups did in the project looked at the idea of belonging.  Each group wrote poems on the theme “where I’m from,” inspired by the poem of the same title by George Ella Lyon.  In her poem, Lyon writes, “I am from the dirt under the back porch… / I am from fudge and eyeglasses / …fried corn and strong coffee.”  Lines from the poems the pupils wrote included:

“I’m from my Dad and my brother
on the bus journey to Tynecastle and happiness,
the smell of the brewery filling the air.”
(Craig, Broughton High)

“I support Hibs because I love it when we’re winning
My favourite number is 10
It’s the shirt that I wear, and it’s the shirt that Boyle wears
I belong with a football being kicked around a field
I belong in the stands of Easter Road.”
(Murray, Liberton High) 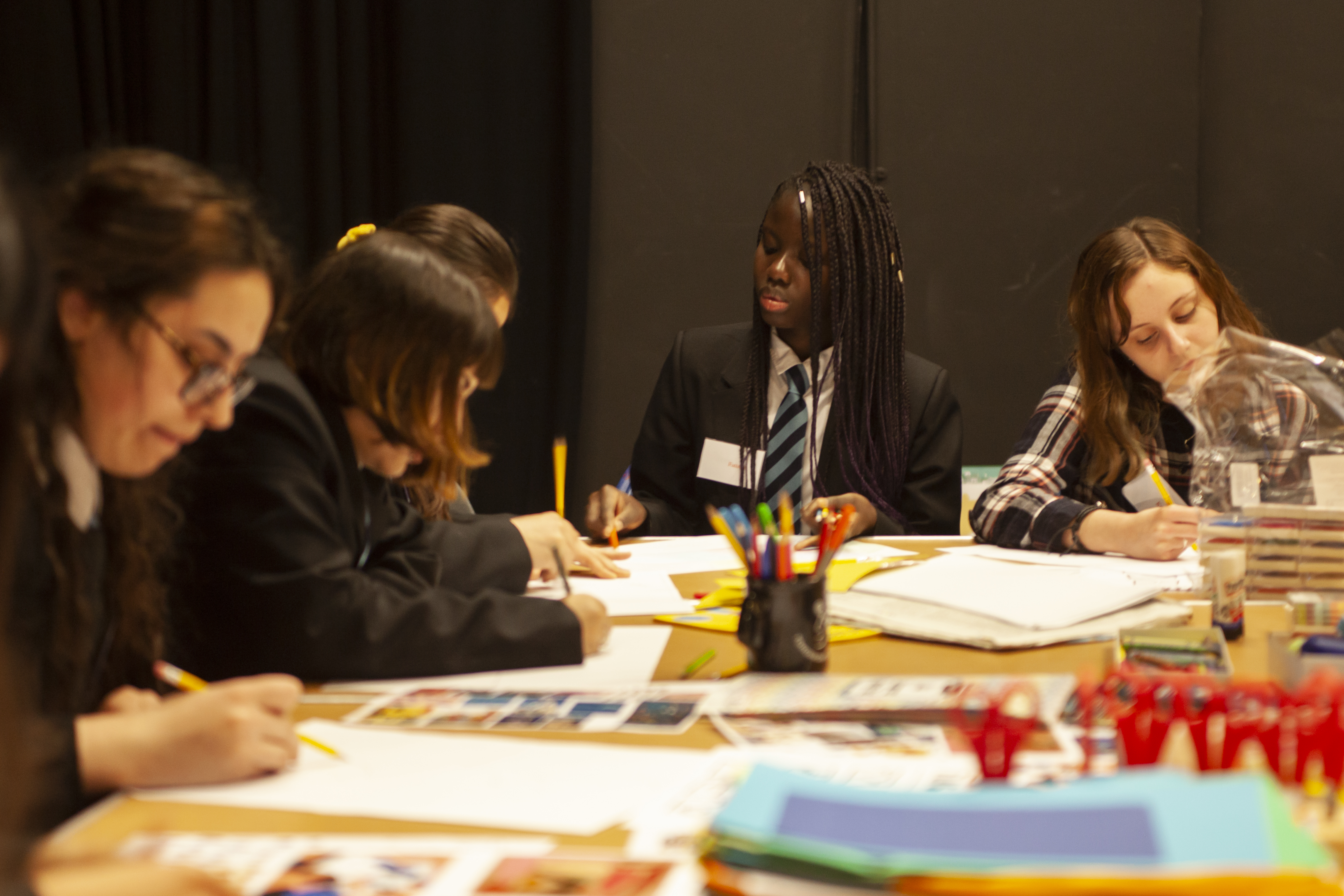 Once the pupils had written about where they’re from, I asked them to zoom in on the details. We talked about sayings we associated with the places we were from: expressions used by family members or in our familiar popular culture. I heard responses ranging from, “d’ye think I came doon the Clyde on a banana boat?" (Glasgow) to “she thinks she’s the last Coca-Cola in the desert!” (Brazil). The groups worked these sayings into collaborative list-poems, and we talked about what could be learned from sayings like these. This led to talking about advice for life: the advice the young people had received from others, and the advice they might pass on. We read the famous Mary Schmich essay “Wear Sunscreen,” and listened to the novelty record it was adapted into in 1999 by Baz Luhrmann. The pupils then wrote their own ‘advice for life’ essays, focussing in particular on the advice they might give to a brand new S1 coming to high school for the first time. From these essays, each pupil chose their favourite piece of advice to turn into a poster.  The posters were then displayed around the classrooms or corridors in each school, and became the blueprint for posters made later, at an activity day in North Edinburgh Arts in May, where the pupils took part in an illustration workshop with artist Eilidh Muldoon and students from the Edinburgh College of Art.

This was a chance for the pupils from all three groups to come together in the same place for the first time since Citizen began in January. Together, they created a giant collaborative floor-poem in North Edinburgh Arts’ theatre space; they listened to YA author Kirkland Ciccone as he told the story of his life through books, and they took part in a workshop with the Superpower Agency on forming opinions and modelling positive behaviour.  These sessions drew on many of the themes we’d been working on in the classroom, and throughout the day the young people seemed to find shared perspectives and common ground in spite of the fact that they spanned a wide age range, came from different places, and attended different schools.

After May, our attention turned to the Edinburgh International Book Festival in August: the pupils knew they were being given the opportunity to showcase their work at a special public celebration in the 300-seat Spiegeltent, as well as to “take over” the festival for two days of Citizen-inspired events. In all the groups, there was an uncertainty about the idea of performing in front of such a large public audience, so most of the young people opted to make short films, into which they could distil the ideas they’d been working on through the project to date. At Liberton and Broughton, each group split into two ‘film teams', and as a result produced two films. At Liberton, one team created 'Bye Biphobia', a film about the problem of bi-erasure, which underlined how important it is to support your bisexual friends. The other Liberton team created'We are Scotland’s tomorrow', a film urging the adults in their lives to leave behind a Scotland that would be cleaner, safer, and more accepting than the Scotland of today. The film featured over a dozen different languages, including BSL.  At Broughton, one of the teams created 'No labels', a film that aimed to push back against damaging stereotypes applied to young people. The other Broughton film was 'Slang', a film that examined the different ways we speak to one another, and which celebrated the pure dead brilliant Scots language.

One group from Broughton bravely opted to perform live at the showcase: the library’s creative writing group – Isabel, Yasmin, Rosie and Kirsten – created a collaborative short story called 'Island Songs', in which a time-travelling portal in the school library transported the four friends around a series of magical islands. The performance included an original score, also called 'Island Songs', composed by Isabel Opat.

The Craigroyston students did not make short films, but offered work they’d created to be read on stage by an actress, with artworks they’d made projected on the giant Spiegeltent screen behind her. These works included Fatoumata’s Where I’m From poem, excerpted above, and Ivan’s Advice for Life piece, which includes the lines:

“I learned some things.
For example, I think everyone knows some bad people and some good people… be friends with the good people.”

Not only did the Citizen pupils wow a crowd of friends, family and members of the public with their words, images and ideas, they also took part in a variety of events across the Book Festival’s Baillie Gifford Schools Programme. The Liberton class were able to pass on their expertise by helping me to co-host a zine-making workshop for primary school pupils: the Citizen group brought along the zines they had made at the very start of things, and were able to use them to show the pupils of Craigour Primary School how it was done. All our Citizen pupils then attended Kirkland Ciccone’s Glowglass event, before packing into the New York Times Main Theatre to greet the fantastic American YA writer Jason Reynolds to the stage. In her event, Lari Don was interviewed using questions prepared by the Citizen pupils; and each group joined the long signing queues to meet and talk to their favourite authors afterwards.

Citizen’s schools engagement is far from over. In the coming year, more schools will be welcomed on board, with the focus moving to Musselburgh and the young citizens of East Lothian. North Edinburgh Arts will host a Citizen-inspired festival in May of 2020, and my hope is that pupils from the three original Citizen schools will be able to get involved and pass along the learning from their engagement with the project. One thing’s for certain: there are many different ways to be a young person in Scotland today, as this project has proved – and if these are the citizens of the future, then our nation is in good hands.